Shooting A Stripper Suspended From Chains

Before my Von Wong does Europe tour, I put together a crazy photoshoot with Montreal Based Stripper Suntory to attempt to put together a couple of unique shots of him suspending himself in chains. This was a very challenging shoot to put together as we required a bunch of elements that were not necessarily easy to obtain.

– A loft with metal beams that we could suspend a person and a couple hundred pounds of weights.
– Some sort of support system
– Large industrial chains

Initially, the original plan was to find some sort of an abandoned building and suspend chains from whatever we found there… I’m quite happy that we decided to go with the safer option of renting a friend’s loft for the afternoon as there would have been no way that we would have managed to drag the chains into an abandoned building (which weigh A TON) or find a safe way to suspend them.

For the industrial chains, Suntory did some research at the gym he was attending to actually got the huge chains used to suspend the massive punching bags and we came across http://www.chainestraction.com/.

We took the time to call them, drive over to see what chains they had available they could lend us. The folks over there were actually quite friendly and gave us a really sweet deal on a 3 day rental on the chains.

Finally, we had to figure out how to have the entire thing hanging from our ceiling so we had a specialist come in, check out the ceiling beams and solder some big chunks of metal together to make this whole thing possible.

I have to admit, the entire experience was quite stressful not quite knowing if our home brewed solution was actually going to work… but it did 🙂 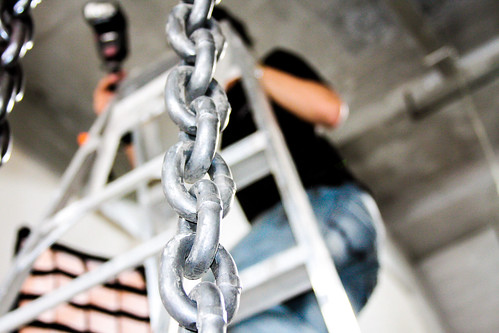 From there, we had to figure out how we could transform a very yellow asian man into a silvery statue. This is where Jessica Renahan, a fabulous makeup artist came in with a solution.

She prepared a mysterious concoction by blending Vaseline, acrylic, oil paint, charcoal powder all together to get the effect. Initially, we didn’t get the blends quite right and Suntory was so covered in Vaseline that he was slipping all over the place and the Vaseline had a tendency of clumping up in odd places so we rubbed down the Vaseline as best we could and covered him back up with a whole bunch of charcoal powder that really gave him a proper matte texture.

In addition to the makeup, we had to have Suntory actually dehydrate his entire body to accentuate his muscles even more. Three days before the shoot, Suntory tightly controlled his diet in order to slowly and safely dehydrate himself to increase his muscle definition. And last but not least, lighting. I threw my lightstands up as high as they could go. Using my Paul C Buff. extra large softboxes, I could get some pretty decent body coverage… almost 10 feet into the air but that was unfortunately not quite sufficient to get any sort of lighting from the top of my model.

To help increase muscle definition in a photograph, it’s always important to remember that harsh directional lighting is what will make the difference to help increase that body definition. Note: for those wondering about the black background, we actually suspended a 10 foot wide black backdrop onto the ceiling using a combination of gaffer tape and backdrop stand! Unfortunately no BTS footage was captured of the setup 🙁

Note#2: Any jewellery designers out there want to transform these photos into works of art? Hit me up!